The potato (Solanum tuberosum) is an herbaceous annual that grows up to 100 cm (40 inches) tall and produces a tuber – also called potato – so rich in starch that it ranks as the world’s fourth most important food crop, after maize, wheat and rice. The potato belongs to the Solanaceae – or “nightshade”- family of flowering plants, and shares the genus Solanum with at least 1,000 other species, including tomato and eggplant. S. tuberosum is divided into two, only slightly different, subspecies: andigena, which is adapted to short day conditions and is mainly grown in the Andes, and tuberosum, the potato now cultivated around the world, which is believed to be descended from a small introduction to Europe of andigena potatoes that later adapted to longer day lengths.

As the potato plant grows, its compound leaves manufacture starch that is transferred to the ends of its underground stems (or stolons). The stems thicken to form a few or as many as 20 tubers close to the soil surface. The number of tubers that actually reach maturity depends on available moisture and soil nutrients. Tubers may vary in shape and size, and normally weigh up to 300 g (10.5 oz) each.

At the end of the growing season, the plant’s leaves and stems die down to the soil level and its new tubers detach from their stolons. The tubers then serve as a nutrient store that allows the plant to survive the cold and later regrow and reproduce. Each tuber has from two to as many as 10 buds (or “eyes”), arranged in a spiral pattern around its surface. The buds generate shoots that grow into new plants when conditions are again favourable. 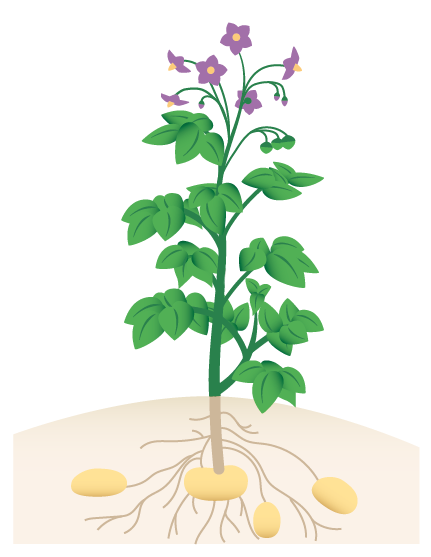 Potato is grown in more than 100 countries, under temperate, subtropical and tropical conditions. It is essentially a “cool weather crop”, with temperature being the main limiting factor on production: tuber growth is sharply inhibited in temperatures below 10°C (50°F) and above 30°C (86°F), while optimum yields are obtained where mean daily temperatures are in the 18 to 20°C (64 to 68°F) range.

For that reason, potato is planted in early spring in temperate zones and late winter in warmer regions, and grown during the coolest months of the year in hot tropical climates. In some sub-tropical highlands, mild temperatures and high solar radiation allow farmers to grow potatoes throughout the year, and harvest tubers within 90 days of planting (in temperate climates, such in northern Europe, it can take up to 150 days).

The potato is a very accommodating and adaptable plant, and will produce well without ideal soil and growing conditions. However, it is also subject to number of pests and diseases. To prevent the build-up of pathogens in the soil, farmers avoid growing potato on the same land from year to year. Instead, they grow potato in rotations of three or more years, alternating with other, dissimilar crops, such as maize, beans and alfalfa. Crops susceptible to the same pathogens as potato (e.g. tomato) are avoided in order to break potato pests’ development cycle.

With good agricultural practices, including irrigation when necessary, a hectare of potato in the temperate climates of northern Europe and North America can yield more than 40 tonnes of fresh tubers within four months of planting. In most developing countries, however, average yields are much lower – ranging from as little as five tonnes to 25 tonnes – owing to lack of high quality seed and improved cultivars, lower rates of fertilizer use and irrigation, and pest and disease problems. 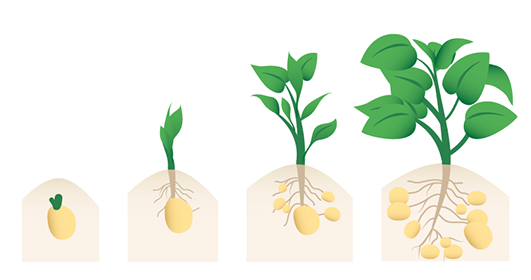 The potato can be grown almost on any type of soil, except saline and alkaline soils. Naturally loose soils, which offer the least resistance to enlargement of the tubers, are preferred, and loamy and sandy loam soils that are rich in organic matter, with good drainage and aeration, are the most suitable. Soil with a pH range of 5.2-6.4 is considered ideal.

Growing potatoes involves extensive ground preparation. The soil needs to be harrowed until completely free of weed roots. In most cases, three ploughings, along with frequent harrowing and rolling, are needed before the soil reaches a suitable condition: soft, well-drained and well-aerated.

The potato crop is usually grown not from seed but from “seed potatoes” – small tubers or pieces of tuber sown to a depth of 5 to 10 cm. Purity of the cultivars and healthy seed tubers are essential for a successful crop. Tuber seed should be disease-free, well-sprouted and from 30 to 40 g each in weight. Use of good quality commercial seed can increase yields by 30 to 50 percent, compared to farmers’ own seed, but expected profits must offset the higher cost.

The planting density of a row of potatoes depends on the size of the tubers chosen, while the inter-row spacing must allow for ridging of the crop (see below). Usually, about two tonnes of seed potatoes are sown per hectare. For rainfed production in dry areas, planting on flat soil gives higher yields (thanks to better soil water conservation), while irrigated crops are mainly grown on ridges.

During the development of the potato canopy, which takes about four weeks, weeds must be controlled in order to give the crop a “competitive advantage”. If the weeds are large, they must be removed before ridging operations begin. Ridging (or “earthing up”) consists of mounding the soil from between the rows around the main stem of the potato plant. Ridging keeps the plants upright and the soil loose, prevents insect pests such a tuber moth from reaching the tubers; and helps prevent the growth of weeds.

After earthing up, weeds between the growing plants and at the top of the ridge are removed mechanically or using herbicides. Ridging should be done two or three times at an interval of 15 to 20 days. The first should be done when the plants are about 15-25 cm high; the second is often done to cover the growing tubers.

The use of chemical fertilizer depends on the level of available soil nutrients – volcanic soils, for example, are typically deficient in phosphorus – and in irrigated commercial production, fertilizer requirements are relatively high. However, potato can benefit from application of organic manure at the start of a new rotation – it provides a good nutrient balance and maintains the structure to the soil. Crop fertilization requirements need to be correctly estimated according to the expected yield, the potential of the variety and the intended use of the harvested crop.

Yellowing of the potato plant’s leaves and easy separation of the tubers from their stolons indicate that the crop has reached maturity. If the potatoes are to be stored rather than consumed immediately, they are left in the soil to allow their skins to thicken – thick skins prevent storage diseases and shrinkage due to water loss. However, leaving tubers for too long in the ground increases their exposure to a fungal incrustation called black scurf.

To facilitate harvesting, the potato vines should be removed two weeks before the potatoes are dug up. Depending on the scale of production, potatoes are harvested using a spading fork, a plough or commercial potato harvesters that unearth the plant and shake or blow the soil from the tubers. During harvesting, it is important to avoid bruising or other injury, which provide entry points for storage diseases.

Since the newly harvested tubers are living tissue – and therefore subject to deterioration – proper storage is essential, both to prevent post-harvest losses of potatoes destined for fresh consumption or processing, and to guarantee an adequate supply of seed tubers for the next cropping season.

For ware and processing potatoes, storage aims at preventing “greening” (the build up of chlorophyll beneath the peel, which is associated with solanine, a potentially toxic alkaloid) and losses in weight and quality. The tubers should be kept at a temperature of 6 to 8°C degrees, in a dark, well-ventilated environment with high relative humidity (85 to 90 percent). Seed tubers are stored, instead, under diffused light in order to maintain their germination capacity and encourage development of vigorous sprouts. In regions, such as northern Europe, with only one cropping season and where storage of tubers from one season to the next is difficult without the use of costly refrigeration, off-season planting may offer a solution.

The soil moisture content must be maintained at a relatively high level. For best yields, a 120 to 150 day crop requires from 500 to 700 mm (20 to 27.5 inches) of water. In general, water deficits in the middle to late part of the growing period tend to reduce yield more than those in the early part. Where supply is limited, water is directed towards maximizing yield per hectare rather than being applied over a larger area.

Because the potato has a shallow root system, yield response to frequent irrigation is considerable, and very high yields are obtained with mechanized sprinkler systems that replenish evapotranspiration losses every one or two days. Under irrigation in temperate and subtropical climates, a crop of about 120 days can produce yields of 25 to 35 tonnes/ha (11 to 15.6 tons per acre), falling to 15 to 25 tonnes/ha (6.6 to 15.6 tons per acre) in tropical areas.

Against diseases, a few basic precautions – crop rotation, using tolerant varieties and healthy, certified seed tubers – can help avoid great losses. There is no chemical control for bacterial and viral diseases but they can be controlled by regular monitoring (and when necessary, spraying) of their aphid vectors. The severity of fungal diseases such as late blight depends, after the first infection, mainly on the weather – persistence of favourable conditions, without chemical spraying, can quickly spread the disease.

Insect pests can wreak havoc in a potato patch. Recommended control measures include regular monitoring and steps to protect the pests’ natural enemies. Even damage caused by the Colorado Potato Beetle, a major pest, can be reduced by destroying beetles, eggs and larvae that appear early in the season, while sanitation, crop rotations and use of resistant potato varieties help prevent the spread of nematodes.

Once harvested, potatoes are used for a variety of purposes, and not only as a vegetable for cooking at home. In fact, it is likely that less than 50 percent of potatoes grown worldwide are consumed fresh. The rest are processed into potato food products and food ingredients, fed to cattle, pigs and chickens, processed into starch for industry, and re-used as seed tubers for growing the next season’s potato crop.

Potato is a versatile, carbohydrate-rich food highly popular worldwide and prepared and served in a variety of ways. Freshly harvested, it contains about 80 percent water and 20 percent dry matter. About 60 to 80 percent of the dry matter is starch. On a dry weight basis, the protein content of potato is similar to that of cereals and is very high in comparison with other roots and tubers.

In addition, the potato is low in fat. Potatoes are rich in several micronutrients, especially vitamin C – eaten with its skin, a single mediumsized potato of 150 g provides nearly half the daily adult requirement (100 mg). The potato is a moderate source of iron, and its high vitamin C content promotes iron absorption. It is a good source of vitamins B1, B3 and B6 and minerals such as potassium, phosphorus and magnesium, and contains folate, pantothenic acid and riboflavin. Potatoes also contain dietary antioxidants, which may play a part in preventing diseases related to ageing, and dietary fibre, which benefits health.

The nutritive value of a meal containing potato depends on other components served with them and on the method of preparation. By itself, potato is not fattening (and the feeling of satiety that comes from eating potato can actually help people to control their weight). However, preparing and serving potatoes with high-fat ingredients raises the caloric value of the dish.